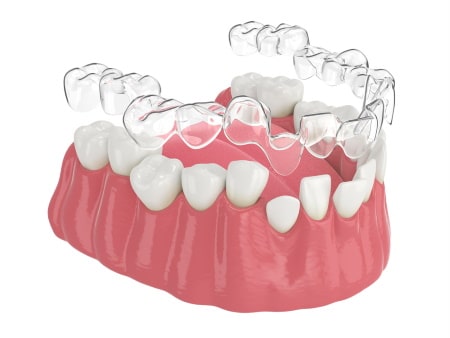 Invisalign aligners can solve common orthodontic problems such as overbites, Underbite, crowded teeth and gaps without the need to use conventional metal braces. It is usually more expensive, but it has a lot of benefits compared to braces.

Contents: How much does Invisalign cost? | Is it a Good investment? | Save Money | Appointment | FAQ

How much is the price of Invisalign in Lakewood?

A common concern of patients wanting to try clear aligners is how much do they cost. There is no specific price because it all relies on the complexity of the patient's dental issue, the location of the dental office, the skills of the dentist, and several other variables. The cost for Invisalign, however, is estimated to range from $3,500 to $8,000; however, insurance can pay up to $1500 for your Invisalign Costs Lakewood. Retainers are included in the price near Lakewood. Invisalign clear aligners cost less than traditional braces. On average, payment plans usually start at $89 per month.

NOTE: Our Hardy Pediatric Dentistry & Orthodontics office located at Lakewood Colorado, has free consultation and x-rays, which includes retainers in the treatment fees.

In Lakewood How much are invisible aligners without insurance?

Out of pocket expenditure for Invisalign without insurance range from $3500 to $8000. With insurance, however, it can sometimes cover at least part of this treatment. It varies depending on your provider.

If you have any questions about your benefits, please contact our benefits coordinator. We are always happy to assist our valuable customers.

Does the Price of aligners depend on the Number of Trays Used?

Yes. Conventional braces are adjusted every few weeks to keep moving your teeth; whereas, Invisalign uses interchangeable trays or “aligners”. You wear one set of trays for 2 weeks and then exchange them for the next in the series. Depending on the complexity of the teeth alignment needed, more trays may be required and there will be an additional charge.

Why isn't there a set cost of Invisalign, but a typical price range instead?

Unlike conventional braces, there are quite a few trays involved with Invisalign treatment. The price depends on the number of trays needed for your treatment. Since the treatment is customized to your teeth, the charges also vary.

Does the pricing include retainers?

Usually, the cost Lakewood charged by an Invisalign provider includes retainers. Retainers are used after the initial Invisalign treatment. They keep the together the work done by Invisalign aligners.

Is it worth the investment?

Having perfectly aligned teeth that you can be proud of is one of the reasons why it's worth the thousand dollars you need to spend. Furthermore, clear aligners are less conspicuous so they are definitely a good investment despite them being a bit more expensive. But there are some things you also need to consider, particularly with this type of treatment. For instance, it can only treat mild to moderate cases of bite issues, but it cannot treat complex bite problems. Attachments can help move the teeth in the right direction, but only to some extent, unlike traditional braces where the wires and brackets assist with the movement.

Invisalign's advantage is that it makes it more convenient to use than metal braces. Brushing and flossing with brackets and wires in your teeth can be a challenge. There are particular foods that may get stuck in between the wire and brackets that could take time to clean. With Invisalign, all you have to do is remove the aligners when you eat, brush your teeth, and wear them back once you're done.

Any orthodontics treatment may seem like only to gain an attractive smile or to improve one's physical appearance, but that's not always the case. For instance, crooked teeth can cause oral health problems in the long run. The price of orthodontic treatment may be high, but there are ways you can decrease your expenses. Here are some of them:

Many insurance companies are now covering the cost of orthodontic therapy. Research for dental insurance providers near you. You should be able to see plans that will fit your needs and save you cash. Sometimes, premiums are higher than the traditional plans, and you'll still have to pay the remainder of your total bill that your policy won't cover. However, you'll save a lot of money compared to paying for the treatment in full. Hardy Pediatric Dentistry & Orthodontics accepts most PPO insurances. We'll also file your insurance on your behalf to ensure you'll make the most out of your policy. We'll provide a complimentary benefits check and handle the insurance paperwork for you.

Unfortunately, government programs like Medicare and Medicaid can't pay for invisible braces. Medicare is intended for helping people at least 65 years old and can only cover emergency-related dental costs. There's a small chance Medicaid can help through the Children's Health Insurance Program available in your state. If you're looking to save money with Medicaid, you probably won't be eligible unless it's an emergency treatment. You are also likely to justify your expense for invisible braces over the conventional treatment. As an alternative, you could try to get a government loan.

FSA is a set investment amount of pretax money taken from your salary and puts aside to be spent on healthcare costs. You likely have FSA as most employers are offering it as part of their benefits package. These are often simple to use as it comes with a debit card that can be accessed anytime. Keep in mind that funds in FSA will not roll over; therefore, you need to use them all up before the year ends. You can learn more about FSA here.

HSA is a government-regulated savings account that lets you set aside pretax income to cover healthcare costs that your insurance policy won't be able to pay. Your contribution with HSA is tax-deductible. What is excellent about HSA is that the funds do rollover, but you'll need to have high-deductible insurance plans to avail of this. Make sure to talk to your doctor's office and benefits representative as they can pay your doctor directly for this particular service and be reimbursed from your FSA or HSA. Discover more about HSAs.

Look for dental schools that can offer economical Invisalign aligner cost near you. You can get huge discounts from their services only if you agree to let a student treat you. Don't worry because a reputable dental school will have a board-certified dentist nearby that will assist the student throughout the process.

Most offices offer monthly payment plans so you don't need to worry about paying your bill all at once. Don't hesitate to ask your dental office about in-house payment plans and what are the terms they offer. At Hardy Pediatric Dentistry & Orthodontics, we offer payment plans for your dental services. We accept major credit cards, including Mastercard, Visa, American Express. We also work with providers like CareCredit, GreenSky Credit, and the Lending Club. We'd be happy to answer any questions you may have about how much is the monthly payment.

There is no need to be concerned if none of the aforementioned programs do not satisfy your needs. A dental grant is available in some programs which significantly lessens the price Lakewood. Some groups provide cost effective oral health treatment even in locations where charity dental care is rare. To top it all off, if you're in a tight spot financially, you can consider organizing a fundraiser for a donation. In spite of this, finding a cheap or even free dental facility where you can have your teeth fixed may take some time, but long-term health depends on proper dental care.

For Lakewood, How much does Invisalign cost with my insurance?

A typical dental insurance policy can cover up to a sum of $1,500 of your treatment cost. Visit our Hardy Pediatric Dentistry & Orthodontics office to find out if your insurance can cover this treatment. Our benefits coordinator can also help maximize your policy for this treatment.

In Lakewood, How much is Invisalign with per month payments?

The cost of Invisalign per month depends on the total cost of your treatment and how long you are going to pay for it. Expect to pay around $99 for 36 months or $200 for 24 months with or without down payment. Please consult your doctor for the available financing options in their office.

Lakewood Invisalign Cost Near Me

To save time and money, choose a dentist who is close to your home, workplace, or educational institution. Having your dentist's office nearby will make things easier, as there may be further treatments or follow-up appointments in the future. To prevent the burden of submitting a claim for compensation in the event of a mishap during treatment, find a specialist with outstanding evaluations for Invisalign clear aligners to ascertain his or her worthiness. You might want to gift yourself perfectly aligned teeth immediately but when it comes to your smile, the right choices can make all the difference. The value of the safety and well-being of our customers is very important to us. Contact us or make an appointment with us today!

With a population of 142,980 as of 2010, the City of Lakewood is the most populous municipality in Jefferson County, Colorado, the fifth-most-populous city in Colorado, and the 172nd-most-populous city in the United States. Located west of Denver, Lakewood is the Home Rule Municipality, one of the principal cities of the Denver–Aurora–Lakewood, CO Metropolitan Statistical Area, and a major city of the Front Range Urban Corridor.

Lakewood has one of the best views of the Rocky Mountain foothills and is easily reached by light rail service from Union Station. The City is a mostly commercial strip, with its "downtown" section in a modern shopping district known as Belmar. Its downtown, complete with shops, restaurants, a movie theatre, and pedestrian-friendly spots, has emerged as a local hangout that attracts visitors from surrounding areas.

With more than 80 maintained parks, Lakewood is also one of Denver's top places for outside activities. Bear Creek Lake Park is the city's most popular playground. Filled with a large fishing lake, paved and dirt biking and hiking trails, picnic areas, and a summer water-skiing concessionaire. For mountain lovers, the steep terrain at Lakewood's Hayden Park on Green Mountain offers a great workout and scenic mountain views. (Source: Wikipedia)